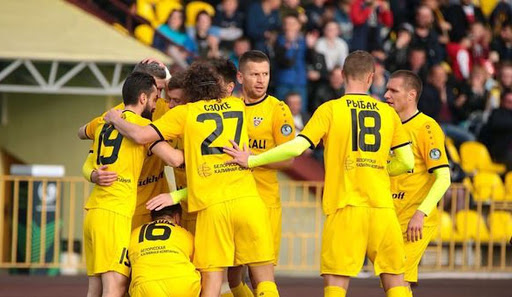 Shakhtyor Soligorsk and Slavia Mozyr will face each other this Saturday, at 15:00, at Stroitel Stadion, in a match related to round nine of the Belarusian championship.
The home team has had a championship below expectations, with only three wins in eight games, but the event is being so balanced that even so the Soligorsk team is still just four points behind leader BATE Borisov.
In the last round, Shakhtyor drew 0-0 at Vitebsk, after two consecutive wins. Slavia Mozyr, who comes just one point from Saturday’s opponent, comes from a zero in the reception to Torpedo Zhodino.
Third placed last season and with a strong investment in the current squad, Shakhtyor only managed to win one of four games as a local in the championship, so their immediate challenge is to impose the home factor.
The Mozyr emblem, which ended the previous season in eighth place, won two of his four games as a visitor and travels to Soligorsk with the intention of scoring.

Football Prediction of the Day Shakhter Soligorsk vs Slavia Mozyr

Shakhtyor Soligorsk has been recovering ground and is now looking to add another dimension to the home factor.
We believe in a triumph for the home team.