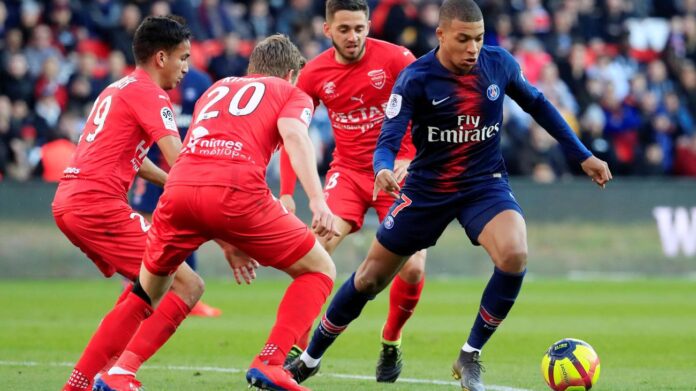 The second game of the day in Ligue 1 will face Nimes and PSG, two teams with different goals this season. Below you will find out more details about the game and about the two fighters!

It comes after a fairly balanced start to Ligue 1, with 2 wins, 2 draws and 2 defeats, managing to score 9 goals and receive only 7.
In the previous round he managed to win surprisingly away from Montpellier, with the score of 1-0.
Last season, when the football was interrupted due to the Co-Vid 19 pandemic, it was on a disappointing 18th place, with a very weak goal average, 29 goals scored and 44 conceded.
Romain Philippoteaux was the team’s top scorer in Ligue 1, with 5 successful goals.

The best French team of the last decade, it still dominates the national football, and at European level it managed the performance to play a Champions League final.
Unfortunately, he lost to Bayern, with the score of 1-0. Even if the first 2 stages meant 2 defeats for the Parisians, it seems that they manage to recover reaching 4 consecutive victories.
Also in these last 4 rounds he received only one goal, the one from the victory with Angers with the score of 6-1.
The team’s top scorer last season in Ligue 1 was Kylian Mbappe, with 18 successful goals and 5 assists.

Football Prediction of the Day Nimes vs PSG

One of the debut matches in round 7 is announced to be one of the most unbalanced of this stage of Ligue 1.
It seems that after the great absences caused by CO-Vid 19, from the beginning of the season, now the Parisians recover and continue their fight. to the 1st place in the ranking. In this match we have a clear favorite, the away team, which will definitely do its best to win, which is why it will try to ease its work through goals from the first half, and in the second half it will take advantage of the mistakes in Nimes’ defense and will score again. In the last 3 stages played by PSG, it mana
ged to score at least one goal in each half, a prediction that I bet for this game as well.