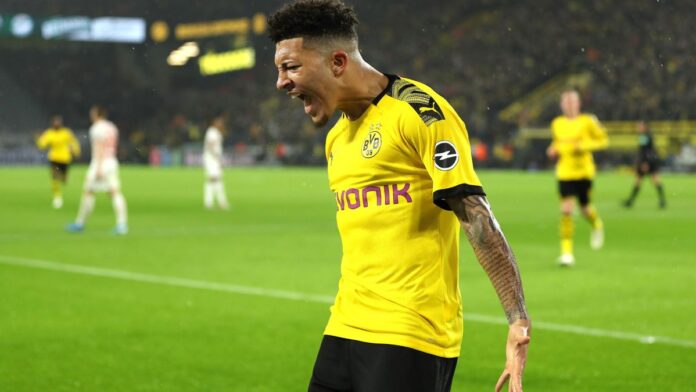 This Saturday, May 16, 2020, Borussia Dortmund welcome Schalke 04 to a match on the 26th day of the German Bundesliga championship.
The match will take place at Signal-Iduna-Park in Dortmund behind closed doors and the kick-off will be given at 3.30 p.m.
In the ranking, Borussia Dortmund is 2nd with 51 points and Schalke 04 is installed in 6th place with 37 units.
On the previous day, Borussia went to win at Monchengladbach and Schalke 04 was held at home by Hoffenheim.

▪️In the past, the two teams have met 102 times since 1963: 35 victories for Borussia, 32 draws and 35 successes for Schalke 04. During the first leg (9th day), the two clubs separated at a draw and virgin.
▪️Borussia Dortmund remain on 3 games at home without success against Schalke 04 since October 2016.
▪️Dortmund, undefeated at Signal-Iduna-Park since the start of the season, has both the best attack (41 goals scored) and the best home defense (10 goals conceded).
▪️Englishman Jadon Sancho, who has 14 goals and 15 assists for Dortmund, will be one of the players to follow in this meeting.
▪️Schalke 04 have not scored any goals in their last 4 trips to the German Championship.

Football Prediction of the Day Borussia Dortmund vs Schalke 04

After more than two months without playing, Borussia Dortmund find their lawn at Signal-Iduna-Park (but without their audience) as part of the Ruhr derby against a Schalke 04 team which has not won in the Bundesliga since 7 meetings. Coach Lucien Favre will have to compose his workforce taking into account the absences of Marco Reus, Axel Wiesel and Emre Can (injured).
For our prognosis, we are betting on a victory for Borussia Dortmund.